I never had an inclination to go to Spain when I was travelling while on exchange. School had a reading week in February though and Spain was the cheapest option for my friends and I. Our first stop: Madrid, the beautiful capital of Spain and probably one of my favourite cities.

We arrived late afternoon/early evening. Transiting from the airport was so easy with the Metro system. Actually, getting around the city was easy in general. We weren’t staying in the heart of Madrid, we shared a cute Air BnB apartment in the Pacífico area, right by the Metro stop. We weren’t in a touristy area, we were right in the midst of the residents. To be fair, we didn’t spend a lot of time in the area though, we had less than 48 hours to explore this city.

Our first stop that night was the city centre, specifically, Puerto de sol. At night, this plaza is filled with musicians and street artists. The plaza acts as a radial centre with lanes spiralling out. Each lane from this plaza houses restaurants, cafes, and shopping. Actually, lots of shopping including high end brands. It is lively and absolutely beautiful.

As the sun sets, the sky gets this cotton candy hue to it and the statutes look like silhouettes. The lights are bright and the architecture of the buildings is exquisite. Each as detailed and as colourful as the next. The whole city seems to be dressed in reds, whites, yellows, and rusts. 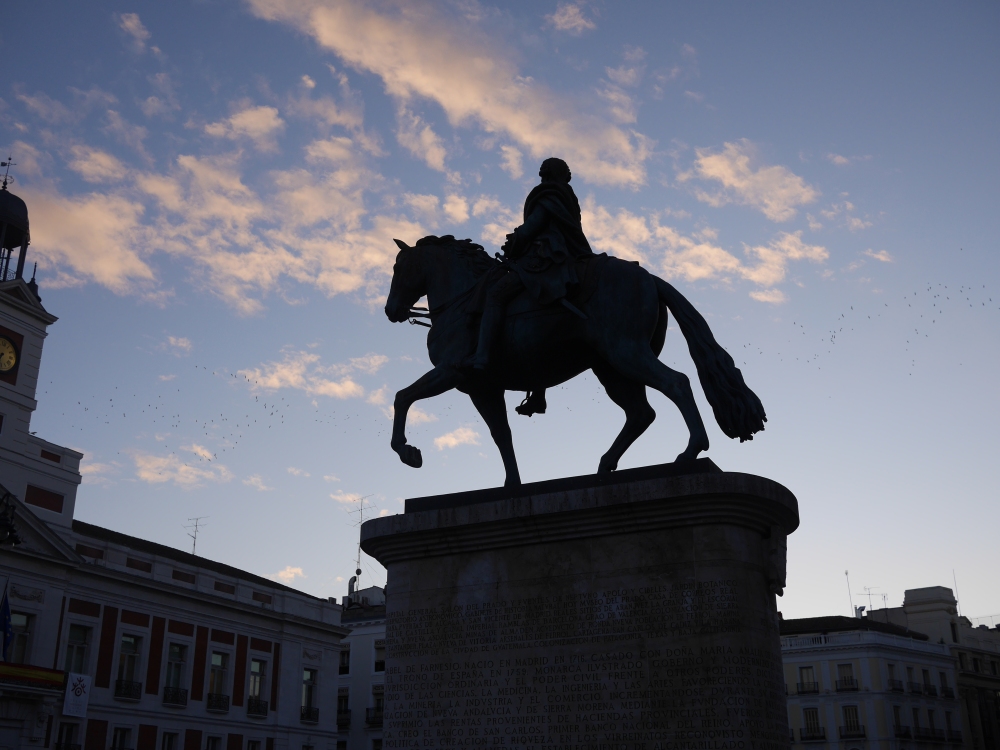 The next morning we went to the Royal Palace of Madrid. The most amazing part about this adventure is that we could take a tour inside the Palace. Let me tell you, it ain’t no Buckingham Palace kids. The grounds are littered with amazing sculptures and if we had gone in the summer, I can only imagine that the gardens would be lush and vibrant.

The inside of the Palace is a dream. The ornateness of each room, the detailed artwork, the patterned carpets. It’s hard to imagine families living there. It’s hard to imagine kids running around those halls and playing in those rooms. The grandioseness of it all is mesmerizing. Each room has it’s own story which is told in it’s decorations: alliances, gifts, etc. It was beautiful to see and I was struck by the size and luxury. 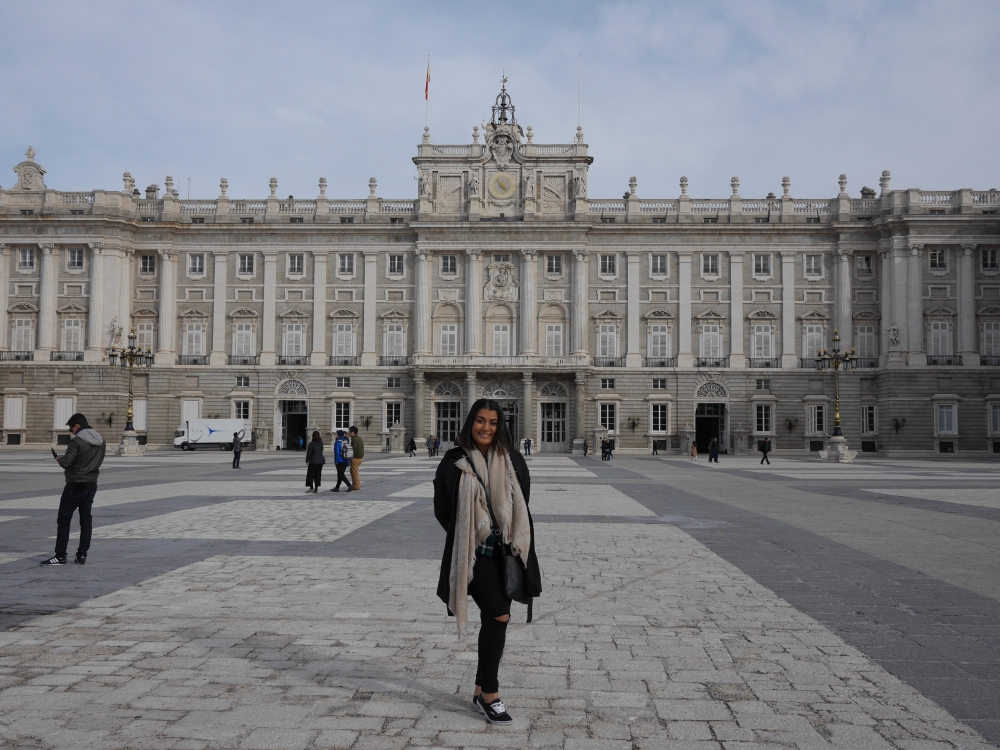 Next, we went to the Temple of Debod. Unfortunately, some of it was closed when we went but just to see the outside was beautiful. We walked through gardens to get to the Temple and again, if it had been any other season but Winter, I can only imagine the splendour. The temple is an Ancient Egyptian Temple which was dismantled and then rebuilt in Madrid. It is surrounded by a pool of water and is a sight to behold. 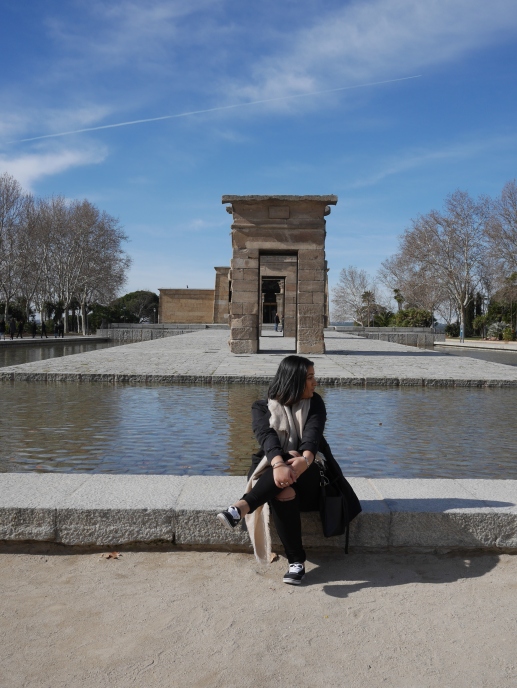 Finally, my favourite spot in Madrid: Parque del Buen Retiro. This park is absolutely massive and you can spend hours just wandering the gardens and visiting the different monuments and buildings. We ended up spending most of our time at Estanque Grande del Retiro. This area of the park houses a manmade lake with a beautiful monument depicting King Alfonso XII. The work was done by José Grasés Riera.

Another wonderful thing about this area of the park: you can rent a rowboat. We ended up being cute as pie rowing along this teal water. We laughed, we sang, we played Spanish music and I probably annoyed one too many people with my Snapchat and Instagram stories. We had so much fun though, and we ended up doing this in lieu of other activities but honestly, so worth it. 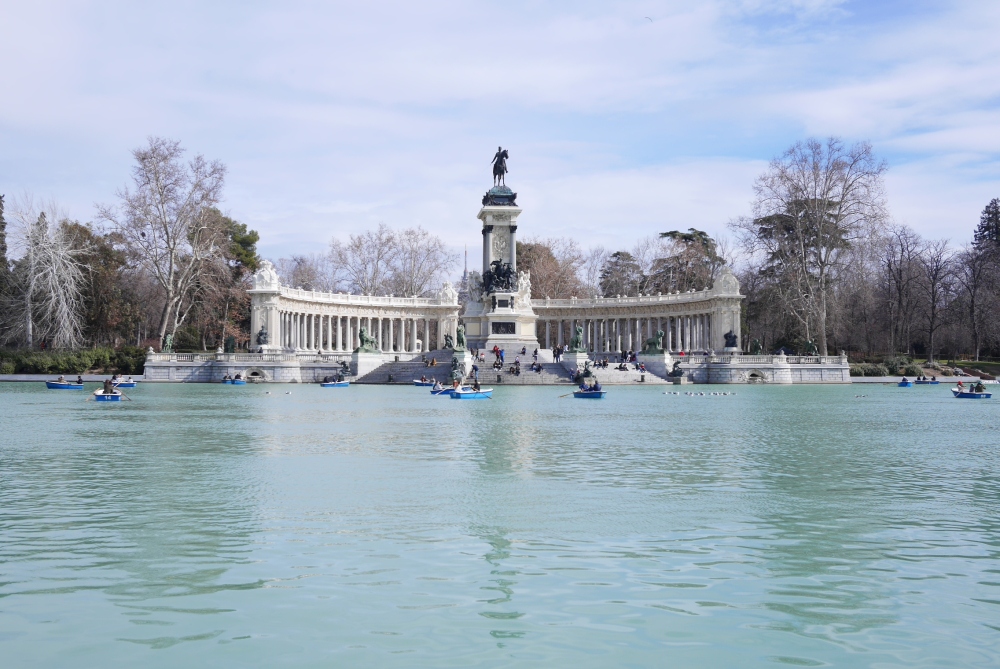 Madrid is probably one of my favourite cities just based on the beauty of it and to think, we were there in winter time. When walking the streets, all I could do was look up and focus on the buildings and the architecture. I probably bumped into so many people because I was recognizing the cohesiveness of the buildings or the subtle detailing in the stone. At night, the buildings lit up to display all the glory. I can’t wait to go back to fill up on more churros and paella in one of the most breathtaking cities.